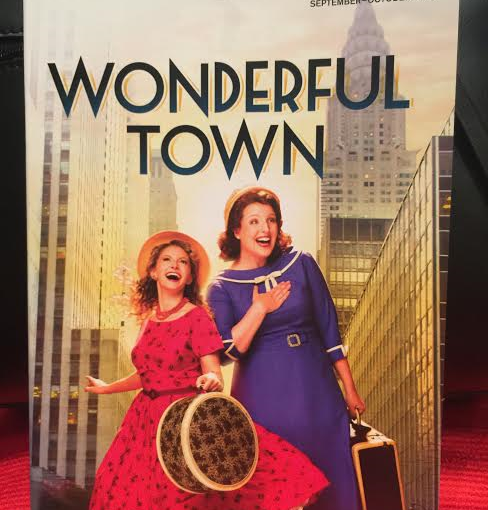 Last night I had the pleasure of attending the season opening celebration of the Goodman Theater.  The evening began with cocktails and a reception at the Walnut Room at Macy’s followed by dinner and wine.  During dinner each guest was presented with a gift (Frango Mints and a Macy’s Gift Card) and then we headed over to the theater for the opening night of Wonderful Town.

The show began with a musical overture highlighting the music that would be showcased throughout the show.  The musical chronicles the lives of two sisters from Ohio, one an aspiring actress, the other an aspiring writer and their adventures in the Big Apple as the set out to pursue their small time dreams in the Big World.  The production plays out what happens when two small town girls attempt to take on the big city without giving up on their dreams.  The opening dance and music sequence demonstrates what could be expected throughout the show.

The performance had the audience laughing, the music was enjoyable and actors were great.  The lead actresses had the comedic timing of Laverne and Shirley and watching their stories of love, frustration, rejection and growth play out kept you wondering and waiting for what was going to happen next.  There were so many laugh out loud scenes in production and the audience appeared to enjoy the performance as much as the actors.

The music, the dancing the timing just came together so well.  The cast of characters, from the artistic slumlord, to the stylish and hip club owner to the jock and his constant The lessons and the experiences the characters have are personal while yet comedic at the same time.  It was a wonderful show and I would highly recommend it.  If you are in to theater and enjoy laughter head on down to Wonderful Town at the Goodman.

2 thoughts on “About Last Night…At the Goodman Theater”